Around 600 young and senior pharmacologists from 5 continents were in

Geneva for the 11th biennial Congress of the European Association for Clinical Pharmacology and Therapeutics (EACPT).

the Congress and Editor-in-Chief Richard Shader gave a Masterclass on scientific publishing
– introduction of a new individual Associate membership category for EACPT – more news on how to join will follow
– individual Associate membership will include online access to the official EACPT journal – Clinical Therapeutics.
– announcements of future EACPT Congresses for Madrid in 2015, Prague in 2017, and Stockholm in 2019. 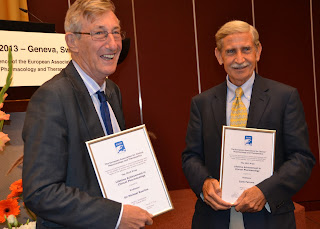 For the Geneva Congress, there are 101 invited speakers from 21 countries – 15 from the European region and a further 6 countries internationally, from the USA, Canada, New Zealand, China, Benin and India. Around 400 abstracts from 57 countries from all 5 continents are being presented as oral and poster communications.
The EACPT was founded 20 years ago and now includes all national

organisations for clinical pharmacology in Europe.

The EACPT aims to provide educational and scientific support for the more than 4000 individual professionals interested in clinical pharmacology and therapeutics throughout the European region, with its congresses attended by a global audience.
The EACPT also advises policy makers on how the specialty can contribute to human health and wealth.
Official EACPT journal: Clinical Therapeutics
More about the 11th EACPT Congress in Geneva.

Tabassome Simon discusses Clinical Pharmacology and the FAST-MI RegistryPosts by delegates from the 11th EACPT Congress in Geneva
This website uses cookies to improve your experience. We'll assume you're ok with this, but you can opt-out if you wish.Accept Read More
Privacy & Cookies Policy

SAVE & ACCEPT
Skip to toolbar