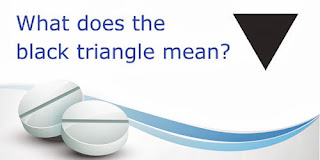 Adverse reactions to drugs and vaccine are common and may be serious, with the risk of leading to hospital admission, delayed discharge from hospital or death. It has been estimated that up to two-thirds of the ADRs may be preventable, or interrupted before they become severe.

The European Medicines Agency (see press release link above) has introduced a new EU-wide scheme to improve reporting and prevention of new, unexpected and serious adverse reactions to drugs and vaccines. The scheme involves increased monitoring, including supported by a list of products identified by an inverted black triangle symbol: typically for products that are new, or have had a new indication or formulation approved, or for which serious concerns have been raised.

Communication materials on additional monitoring and the inverted black triangle symbol have been produced in all EU languages. For further details see the factsheet and video below and the EMA Press Release.

Video in English (with subtitles in all official EU languages)

To view subtitles, click on ‘captions’ at the foot of the viewing pane and select your language. You can also turn subtitles on and off and change the way they appear.

Transcript of podcast by Tabassome Simon on Clinical Pharmacology and FAST-MIEMA health professional working party elects EACPT’s Gonzalo Calvo as its first co-chair
This website uses cookies to improve your experience. We'll assume you're ok with this, but you can opt-out if you wish.Accept Read More
Privacy & Cookies Policy

SAVE & ACCEPT
Skip to toolbar